As a preview to Episode 4, FutureCite chats with O’Donnell on the vibrancy that NAIT’s Student Housing  will add to the Living and Lifestyle in Blatchford.

In Episode 4,Tom Lumsden, Development Manager of Blatchford, speaks with FutureCite on the “Buzz in Blatchford” with NAIT Student Housing as part of the Living and Lifestyle demographic in this micro-city.

NAIT’s President & CEO, Dr. Glenn Feltham shares a commentary on the polytechnic institute’s vision in being part of the Blatchford Community – to secure a 100 year future growth for NAIT.

A long-term plan to consolidate on main campus will significantly enhance students’ experience and allow NAIT to operate more efficiently while being an integral part of a vibrant, sustainable community.

These strategic land acquisitions will nearly double the size of the Main Campus, enabling NAIT’s future and vision to be one of the world’s leading polytechnics and the most relevant and responsive post-secondary institutions in Canada. NAIT will revisit in 2019, its Campus Development Master Plan, which serves as a framework for NAIT’s long-term physical development. Included in NAIT’s campus development priorities are the development of a student residence and a Skills Centre, which will be North America’s leading facility for skilled trades’ education.

NAIT’s plans include, subject to a number of conditions in the agreement and a closing date of January 2024 for Blatchford lands:

In a separate agreement with the city, NAIT has purchased 4.8 hectares North of Main Campus on the site of former Westwood Transit Garage.

Blatchford is one of the largest sustainable development projects in the world, spanning 536 acres in the heart of Edmonton. Over the next 20 to 25 years, Blatchford will house 30,000 residents in a sustainable “city within a city”, with a central location in close proximity to the amenities of a vibrant downtown district.

Blatchford will be a self-contained micro-city with family-friendly housing ranging from townhouses, stacked townhouses and four to six storey apartments with outdoor private areas and pedestrian friendly streets, and a seamlessly integrated mix of affordable housing. What will unify the vision for a sustainable community includes everything from the design of the public spaces, and the streets, parks and plazas, to the construction of the buildings.

Major features of Blatchford will include a town centre for neighbourhood amenities, a large central park within walking distance for all residents, a network of open and public green spaces, spaces and trails throughout the community, and spaces for urban agriculture (communal gardens).

These major features include

All stages of Blatchford will feature: 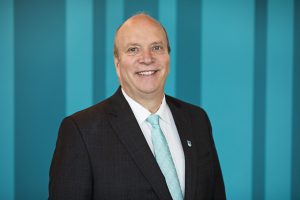 Dr. Glenn Feltham was appointed President and CEO of the Northern Alberta Institute of Technology in 2011.  As NAIT’s sixth president he has led the institute toward its vision of becoming one of the world’s leading polytechnics, with a focus on relevance and responsiveness.  Under Dr. Feltham’s leadership, NAIT plays an essential role in strengthening Alberta’s and Canada’s economies through hands-on, technology-based education and applied research in partnership with industry.

Beyond his role as President and CEO of NAIT, Dr. Feltham has played a leading role in advancing the post-secondary system in Canada and Alberta.  He was Chair of Polytechnics Canada, a national organization which works to elevate the place of polytechnic education and applied research in Canada, and advance our country’s skills agenda.   He also Chaired the Council of Post-Secondary Presidents of Alberta (COPPOA).  COPPOA works across all of Alberta’s post-secondary institutions to continue building the strongest possible system.

Tom brings over 25 years of knowledge and experience in land development in the public private sectors. He initially started his career with the City of Edmonton and then moved to the private sector initially with Carma, then with Brookfield Residential, most recently as Senior Development Manager.  Tom returned from the private sector to the City of Edmonton as a Director of Development Coordination in 2016, and recently became the Development Manager of Blatchford in 2018.  Tom is a Professional Engineer and a graduate of the University of Waterloo.  He has extensive experience leading and facilitating land development for major projects in Edmonton.  In the Blatchford role, Tom leads the team responsible for the planning, building and sales for Blatchford

About Blatchford Airport, City of Edmonton

The airport was closed in November 2013, and as of 2018[update], the land is being redeveloped by the City of Edmonton as a planned community called Blatchford. Source https://en.wikipedia.org/wiki/Edmonton_City_Centre_(Blatchford_Field)_Airport

Ian O’Donnell is the Executive Director of the Downtown Business Association for Edmonton Alberta, and brings with him his passion for building livable urban communities, and his experience as a project manager for architecture firm Manasc Isaac and volunteer with the Downtown Edmonton Community League and other boards. Ian’s passion rises from being a downtown resident, a community builder and the fearless leader of the Downtown Business Association.  He wears many hats, and for his series, you will hear, see and feel the sounds, sights and visions of citizens, communities and companies going through the impact of the digital transformation – in how they will live, at work and home, and how they will be spending their leisure time.