In Episode 6, Erik Backstrom talks about the commercial retail and hospitality opportunities in the retrofitted iconic buildings along the river front – Pumphouse #1 and #2, as well as the iconic Rossdale Power Plant!

So if you are entrepreneurial and looking for location to lease and  or operate in the iconic Rossdale Power Plant or  the two Pump House #1 and #2 buildings along the waterfront, let the City know!

The City is open to ideas from entrepreneurs interested in leasing as tenants or operating the facilities for anything from restaurants to retail to commercial.

Yes your ideas will help to build communities and activities and business to create a vibrant district!  Go on….give a try!  You may surprise yourself!

You will be nested in a pretty cool location a few steps from the downtown core and the river valley park – with the best views of nature along the future Waterfront Promenade!

Stay tuned for Episode 7 for what’s developing for the Waterfront Promenade!

Waterfront real estate is a sought after commodity in any city – in particular one that is located along a pristine River Valley System that has not seen commercial or industrial development in decades in the City of Edmonton. Yes, it is about location!  It’s a peninsula of land where the new Rossdale Bridge spans over the North Saskatchewan River –  from the south river bank to the iconic architecture of the former Rossdale Power Plant.  The River Crossing plan connects the vibrant downtown core to the north, with the Rossdale community to the east. 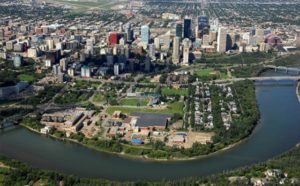 The City is ready to take on the next stage of connecting its downtown core and residential Rossdale community with the highly anticipated waterfront development of the River Crossing initiative. Its vision is to connect the waterfront residential communities and the vibrant growing downtown district with waterfront access to the North Saskatchewan River Valley  System – one of the largest contiguous river valley park systems in North America!  (See past Episode https://futurecite.com/its-in-our-nature-episode-5-connecting-communities-to-the-waterfront-next-steps/)

In previous Episodes we covered the ICE District in the City’s downtown core which kick started the $multi-billion development of new residential and commercial buildings – including Rogers Place Arena, the Stantec Tower, the JW Marriott, and several residential mixed use high-rise developments. (See https://futurecite.com/sneak-preview-2-1-on-districts-with-futurecite-ianomoments/)

Developing River Crossing’s river facing peninsula of land needs visionary insight to fully capture and realize the location and amenity opportunities presented  by a pristine river waterfront and the power plant’s industrial architectural facilities designated for reuse!  San Francisco captured its waterfront, Vancouver has the Seawall, and Toronto is developing its Harbourfront.

It’s an opportunity for visionary developers who understand the key Living and Lifestyle elements needed to interest both citizens and visitors, and to attract future innovation, technology and service businesses who are looking for easy access to lifestyle activities and a work /life balance culture for their NextGen demographic and technology hires. Imagine walking minutes away from home or work into nature’s River Valley –  to  swim or canoe, and discover 100 kilometers of natural and groomed  park trails to cycle, run, or hike, or be able to walk  to sports, dining and world class entertainment venues.

Erik and leads transformational planning projects, with focus to those involving under-utilized land (having a high degree of political involvement) requiring strategic investment from the City of Edmonton to provide a foundation for future private sector investment. He also has involvement in transit-oriented development projects and the next generation of planning for Old Strathcona.  Erik currently manages the River Crossing initiative.  He has a Master of Community and Regional Planning from the University of British Columbia, and a Bachelor of Arts/ Geography from the University of Alberta.  He has lectured at the University of Alberta School of Urban and Regional Planning and served on the board of the Alberta Professional Planners Institute (APPI), and is now the APPI historian.

River Crossing is at the heart of the urban core of the City of Edmonton – located between the City’s downtown core to the north, and the University of Alberta across the river to the south.  A natural landing spot of the architecturally iconic Walterdale bridge, River Crossing connects North America’s largest contiguous River Valley Park System, to  the Rossdale residential communities,  Kinsmen sports facilities, a ball park, public parks, the Provincial Legislature grounds, and cultural and as well as museum facilities.

River Crossing land area covers approximately 17.6 hectares (ha), of which 80% is owned by the City of Edmonton. Much of the River Crossing area is currently undeveloped open space (only certain portions of the area are currently zoned for open space uses). The former Rossdale Power Plant and Pumphouses in the River Crossing locations along the river front are designated for future reuse.  Lands along the North Saskatchewan River include well-used multi-use trail connections (and access to boat launches).  Part of the EPCOR Rossdale site along the river front is to be subdivided and designed to become the Touch the Water Promenade.